Religious media are part of the knowledge production of faith communities. As producers, disseminators and archivists they play important roles for perpetuating a certain faith tradition. In this workshop, we will analyze how religious journalists and others involved in producing religious online and print media work and thus nourish and support religious affiliation. For this purpose, we will look at three areas of religious journalism: content, technology, and the larger religious network. 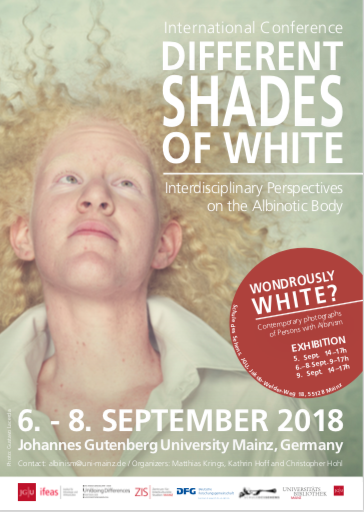 At this conference organized by the project group ALBINISM, participants present papers that discuss albinism in historical, social, aesthetic and/or political perspective. We are interested in the varying perception, performance, representation, framing and treatment of albinism across different times and in several locales. How does the presentation of albinism differ in medicine, art photography, fictional literature or in the humanities and social sciences? The conference brings together experts from inside and outside academia to foster dialog and exchange about practical, political, artistic and scholarly perspectives.

In addition to lectures and presentations, the conference also comprises a World Café session for all participants. An exhibition of photographs and videos by several international artists portraying persons with albinism complements the conference.

The research unit Un/doing Differences welcomes Prof. Andrew Apter, anthropologist and historian at University of California, Los Angeles (UCLA) for a guest lecture on May 30th, 2017. The lecture is part of the departmental lecture series at the Department of Anthropology and Africa Studies.

FESTAC 77 and the critique of racial capital

Nigeria’s Second World Black and African Festival of African Arts and Culture, otherwise known as FESTAC 77, signaled a decisive break from Senghor’s ideology of Négritude, which had been enshrined and promoted eleven years earlier in Senegal’s Festival Mondial des Arts Nègres (FESMAN). Although initially modeled on its Dakar precedent, FESTAC 77 fashioned an inclusive horizon of blackness that crossed Négritude’s ethnocultural threshold between “Arabo-berbérs et Négro-africaines,” precipitating Senghor’s widely-publicized threat of a boycott and his subsequent dismissal as FESTAC co-patron.

Building on my earlier attention to Nigeria’s petro-capitalism and spectacle of culture, I argue that FESTAC’s remapping of global blackness—and the falling-out between Senghor and Nigeria’s president Obasanjo—cannot be reduced to ideology or geopolitics, but represents historic transformations of racial capital through dirigiste mechanisms of cultural production. By focusing on genealogies of racial capital, I trace the origins of postcolonial African festivals not to colonial grammars of difference and domination, but to fetishized forms of Atlantic slavery. To understand the critique of Négritude that took place during FESTAC, I relate the commodification of blackness underwritten by oil to the earlier history of enslaved Africans as Atlantic commodities. Andrew Apter is Professor of History and Anthropology at the University of California, Los Angeles (UCLA), where he directed the James S. Coleman African Studies Center and a Mellon Faculty Seminar in Black Atlantic Studies. His books include Black Critics and Kings: The Hermeneutics of Power in Yoruba Society (1992); The Pan-African Nation: Oil and the Spectacle of Culture in Nigeria (2005) which received the 2007 Amaury Talbot Prize awarded by the Royal Anthropological Institute; and Beyond Words: Discourse and Critical Agency in Africa (2007), all with the University of Chicago Press. He also co-edited Activating the Past: History and Memory in the Black Atlantic World (2010) with Lauren Derby. With his latest book, Oduduwa’s Chain: Locations of Culture in the Yoruba Atlantic, forthcoming in 2017, he is currently working on “History in the Dungeon: Atlantic Slavery and the Spirits of Capitalism,” a project that focuses on slave forts and castles and restores enslaved Africans (and their hyper-alienated labor power) to the historically repressed epicenters of capitalist modernity.